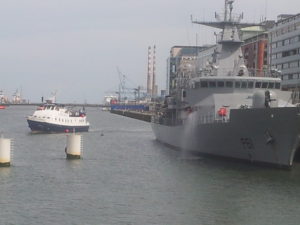 This weekend saw the naming of the new Naval Service ship, the LÉ Samuel Beckett at Sir John Rogersons Quay, Dublin. There to welcome her was our very own MV St Bridget (right) along with Taoiseach Enda Kenny and niece of Samuel Beckett, Caroline Murphy. 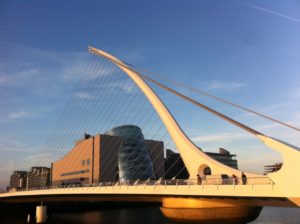 The vessel, costing €50m, is the first of a pair of OPV90 offshore patrol class new builds for the navy. Having sailed from the Naval Service Base in Cork Harbour it aptly docked at the Samuel Beckett Bridge (right) over the weekend.

Speaking at the naming ceremony Taoiseach Enda Kenny said “LÉ Samuel Beckett will be a tremendous asset to the Naval Service. I know that the ship’s first captain, Commander Ken Minehane and his crew are eagerly looking forward to working up the new ship to its full potential.”

The cost of the two new ships is €108m. LÉ Samuel Beckett replaces LÉ Emer, which was decommissioned and sold late last year. The ship will have a main crew of 44. Work on the second ship, LÉ James Joyce, is “well advanced”, said the Defence Forces, and it should be completed early in 2015. LÉ James Joyce will replace LÉ Aoife. 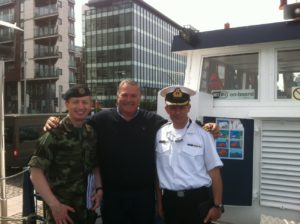 Pictured right, Captain Ray Kane, Dublin Bay Cruises’ Eugene Garrihy and Captain Cormac Rynne on Board the St Bridget at the arrival, launch and blessing of the LÉ Samuel Beckett in Dublin.